Seeing red or tickled pink? The colour of the Djinn chairs in 2001: A Space Odyssey

The Djinn chairs in 2001: A Space Odyssey (1968) are one of the most iconic chair designs to ever grace the big screen. To coincide with the 50th anniversary of Kubrick’s Sci-Fi masterpiece we delve into the story of the these famous chairs to reveal a fascinating debate on their real colour, share the process of our own restored Djinn and show you where to buy one for your own home.

Shot before man first went to the moon and without the benefits of computer technology, this film delivered captivating, realistic images of space using effects which broke new technical and artistic ground. This unique and influential film also featured striking, playful yet functional chairs and sofas which we first see as Dr Floyd enters the Hilton lobby of Space Station Five on his way to the moon.

The Djinn chairs were designed by Olivier Mourgue in 1965 whilst working for French manufacturer Airborne International, and embody the essence of 60s futuristic design. The name ‘Djinn’ comes from an Islamic mythological spirit which is capable of changing shape from human to animal. Made from tubular steel covered with foam padding and upholstered in jersey fabric, the single and doubled seated versions of the chair seen in 2001 were complemented by an ottoman, a chaise longue and a day bed.

This chair series has firmly taken it’s place in design history. With their wave like, low slung silhouette, this seating represents Stanley Kubrick’s then vision of the future in furniture form (the film’s world premiere was 2 April 1968) and this highly influential movie has gone on to define what most visualise as the ‘future’ ever since.

We are thrilled to offer the Djinn chair for sale through Film and Furniture. These professionally restored Djinn chair’s are made from the original Airborne bent steel tubing shells (Airborne went out of business many years ago) and are recovered by law in webbing, fireproof foam and zipped stretch Jersey. These pieces are museum quality and have been loaned to the Design Museum in London and Film and Furniture currently have one on loan to the Filmmuseum, Frankfurt for their  Kubrick’s 2001. 50 years A Space Odyssey exhibition created in collaboration with Christiane Kubrick, Jan Harlan, the Stanley Kubrick Archive at the University of the Arts London and Warner Bros. Entertainment Inc.

The original film props have not survived. Stanley Kubrick destroyed all the sets and props afraid that they might fall into the hands of lesser directors. Coupled with the fact the Djinn chairs are no longer in production, they have become valuable collectors items. Their original wool-based stretch jersey covering proved irresistible to moths and most older versions are full of holes, so our original shells with new, law compliant, and professionally made coverings are the best way to own to these beautiful chairs.

The Djinn chairs stand out loud and proud against the high white interiors of the Space Station’s lobby. Our recent investigations into the chairs have thrown up some interesting debates on the true colour of the chairs in the movie.

In Kubrick’s original film and in many of the stills in general circulation the chairs appear bright red. Red is the colour most people associate with the film and these chairs. However, the most recent remastered version of the movie shows the chairs with a distinctive magenta tinge. Some sources say they were magenta and the lighting of the film set made them look red. It’s interesting because even if they were magenta in reality they looked red on the screen and therefore everyone has come to associate the red chair with 2001.

Dennis Gilliam, a California based 2001 collector, author of www.2001spacesuit.com and supporter of the Stanley Kubrick touring exhibition (which opened in Frankfurt in 2004 and recently finished it’s stint in Copenhagen via many cities around the world) told Film and Furniture “There has been a lot of discussion on the colour of the Djinn chairs in 2001. While the chairs have always been referred to as red in colour, my research indicates they were in fact a pinkish/magenta colour.  2001 film production records at the Kubrick Archive in London refer to the chairs as ‘magenta’. In addition, during discussions with Katharina Kubrick [Christiane Kubrick’s daughter from her first marriage to Werner Bruhns] at the [Stanley Kubrick exhibition] LACMA opening, she said the family had kept one Djinn, and she and her sister played on it. She remembers it was a colour she described as ‘fuchsia’.”

Gilliam continues: “While the colour of the chairs can be called pink, magenta, or fuchsia, I will use the term “magenta” based on the reference I found in the film production material. The color hue of the pink fabric changes drastically in different lighting. In bright sunlight it looks magenta/pink. In fluorescent lighting it looks bright pink. But in dim lighting it appears red. Further checking of images from 2001 identified that the built-in benches in the Space Station also used the same fabric”. 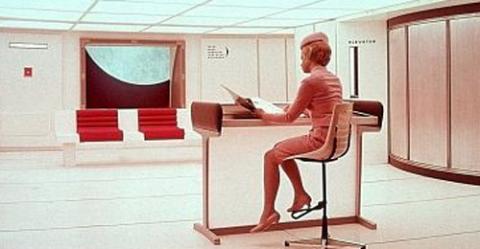 The chairs Gilliam loaned to the LA exhibition were magenta as shown below but all the photos of the exact same chairs in the LACMA appear red due to lighting. 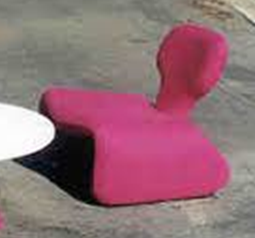 In the majority of pictures and film stills we see of the chairs, including those in ‘official’ books, the chairs look red so most followers and fans of the film looking for a Djinn chair are looking for a red version. Talking with the Events & Kubrick Estate Manager at Warner Bros recently she described them to us at Film and Furniture as “raspberry red”.

One last piece of evidence – an original photo of the film’s warehouse storage unit in Shepperton Studios, UK (below) sent to us by Warner Bros meant we at Film and Furniture had our most recent chair covered in pink in honour of this debate.

Here you can see the restoration process.

Our pink Djinn can be seen in all it’s glory in the Kubrick’s 2001. 50 years A Space Odyssey exhibition which opens in the Deutsches Filmmuseum, Frankfurt on 21 March. This exhibition invites visitors to immerse themselves in the genesis of the film and is open until 23 September 2018.

It answers the question of how Kubrick’s vision of the future was developed and to what extent this was achieved. In addition, it places the film in its production context and looks back on its reception history: 2001 has left its mark on more than 200 films, in music videos and advertising, in design, painting, architecture and poetry. In a separate section of the exhibition, visitors can view works from different art genres which have been inspired by Kubrick’s masterpiece.

Although not officially announced by Warner Bros as yet, but as widely speculated, the 4K Ultra HD Blu-ray of 2001 is on it’s way with a release date of March or April being rumoured. You can pre-order now here >

Possibly even worth buying a new telly for the occasion if you ask us.

And taking a week off work to watch it over and over. 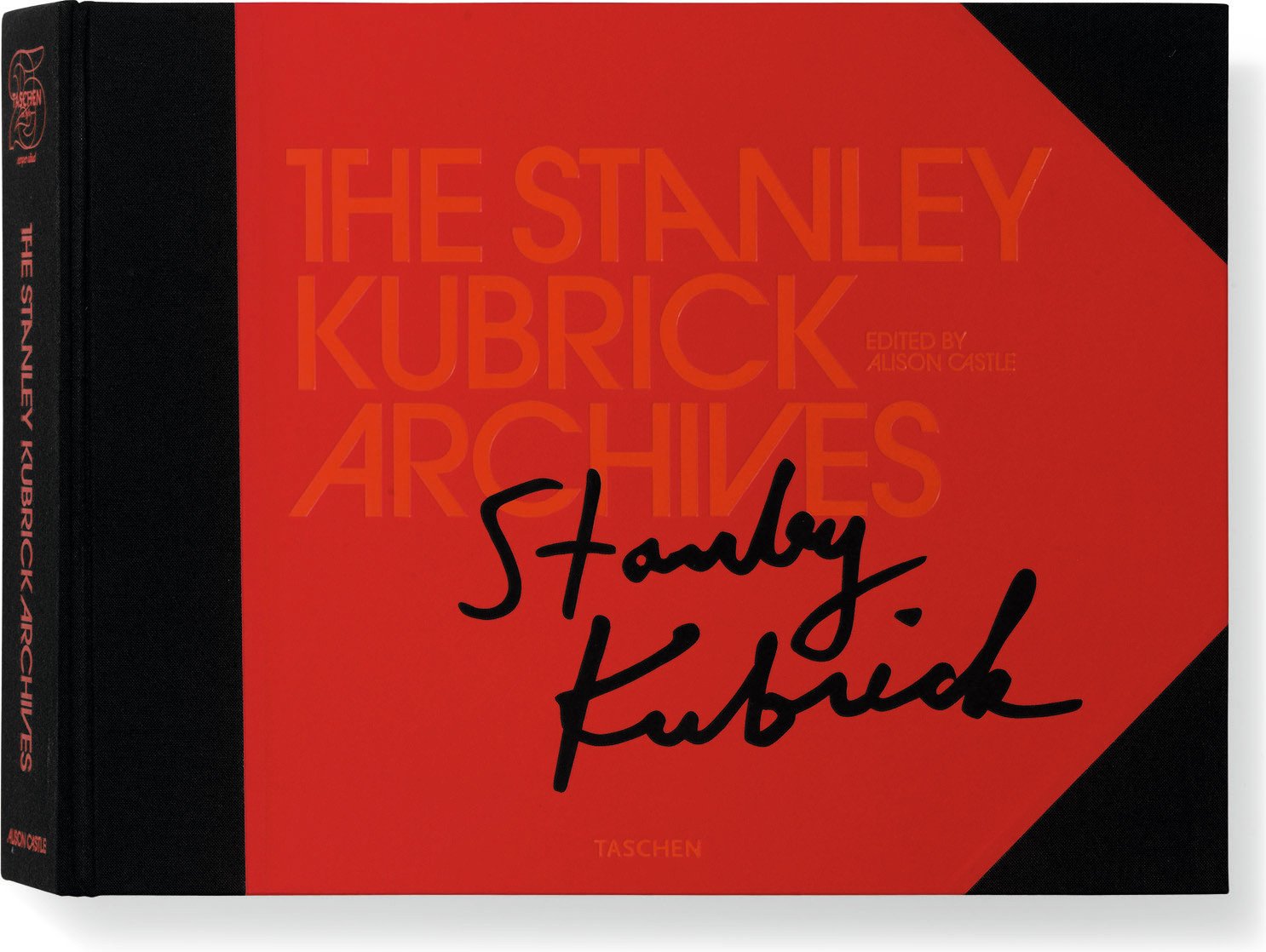