The new Mexican adaptation of the film Perfectos Desconocidos (Perfect Strangers) directed by Manolo Caro (also of The House of Flowers) tells the story of a a group of best friends who gather for a dinner party during a solar eclipse. The dinner takes place in the stylish apartment of Eva (Cecilia Suarez) and Antonio (Bruno Bichir) and their guests suspect it’s just another typical evening – until the hostess proposes a game.

Based on the screenplay by Paolo Genovese, this story has seen several incarnations: The original script and film were made in Italy in 2016 and has undergone remakes in France, Spain and Greece – and now a new Mexican production with Caro at the head of the table. The story certainly has universal appeal given that it centers around the one thing that dominates so many of our lives: The smartphone.

The game Eva proposes is that all guests must lay their phones on the table and read aloud all incoming messages and answer all incoming phone calls in front of the entire group. What begins as a provocative party game quickly becomes a wild ride full of twists and “textual tension” in this comedy about the secrets we all carry in our pockets.

We can find a great deal of inspiration from the interiors of Eva and Antonio’s apartment – a film set design which is also key to the rhythm of the action. The guests first gather in the kitchen and are then seated for dinner around a circular, marble dining table. The camera moves around the table as the conversation between the actors hots up and the action plays out – meaning we get to see all the details of the interior design of this dining room and the lounge area beyond.

The colour themes of rich, dark blue walls, some Mid Century-style furniture and lighting, gold accents, sophisticated wooden floors and pops of colour is bang on trend. Set designer Sandra Cabriada was responsible for designing, building and for choosing all the furniture and décor for the set. We talked to Cabriada about her role in the film.

Film and Furniture: What was your process for designing the film set for Perfectos Desconocidos and what does the apartment tell us about the owners, Eva and Antonio’s personalities? And why did you choose this particular colour scheme?

Sandra Cabriada: After reading the script, I realised the principal sets were the dining room and the kitchen, so I started there before designing the rest of the apartment. Keeping the characters that live there in mind, I knew the scale of the apartment couldn’t be too big, but I did want it to be a contemporary style with an open kitchen.

My aim was to design a sophisticated apartment with a combination of contemporary and timeless elements. For this film, the colour palette was very important to convey a stylish and artsy mood. Talking with director Manolo Caro, him and I agreed to have a darker set without big patterns and minimal textures, so that the wardrobe for the characters could be patterned and colourful. We also used some Mexican decorative pieces to make it stylistic and authentic.

F&F: Is this a real apartment or a film set?

SC: It is a film set and it is meant to be in Mexico City. To begin, we had to find the correct space to shoot and build a set that would be able to fit many actors at the same time. For this reason it was better to work in a studio than on location. It also helped with production to have a set with movable walls which isnbetter for lighting purposes as well. For me, I find it more comfortable to work on a stage and it is also more fun and delightful to design and build a set from scratch.

F&F: Did you work closely with director Manolo Caro or did he give you a free reign?

SC: It was a bit of both. I had several meetings where I worked closely with Manolo discussing the film, the colour palette and set details. I understood his visual concept of the film and felt comfortable to propose my style and design. I enjoyed working with him.

F&F: What were the challenges in creating this film set?

F&F: Our eyes were drawn to the following pieces in Eva and Antonio’s apartment – what can you tell us about them?

SC: The dining room table is one of the most important pieces in the film as a lot of the story happens around it. Originally, we drew the table with a different geometric design but when the marble arrived with beautiful natural streaks, I decided to cut it differently and optimise on that.

Find round marble-topped dining tables as shown above:-
Top left – the Lucerne white marble 4 seater round dining table, £849 from Dwell
Top right: The west elm Silhouette Pedestal 4 Seater Dining Table, £899 from John Lewis
Below: the classic and supersized Tulip dining table in Arabescato Marble & white base (Oval 244cm), currently on sale at £7,058 from The Conran Shop.

SC: The dining chairs were difficult to find and we looked all over the city for them. Finally, we found chairs in the right Gaia style, but we had to upholster them in pale pink to have them fit in with our colour palette. They needed to be that colour pink to contrast with the deep blue walls. The chairs originally had light wooden legs that we painted black to match the rest of the room.

– The gold cutlery and condiment set

SC: We chose the gold cutlery to contrast with the white marble.

– The art: the captivating large framed painting behind Eva and Antonio and the two head sculptures.

SC: We worked with a friend of Manolo, Alejandro Serralde Estopier, who is an artist and gallerist (director of Closed Door Art) to help find the painting. Created by Horacio Quiroz, we chose this work as we felt it reflected the distorted and complex minds/actions of the characters. It also showed the interior shadows of human beings.

The head sculptures, created by Francisco Esnayra, were placed in the room as witnesses of what happens throughout the evening as well as to observe the mechanisms of human behaviour.

– The sideboard with gold/brass detail below the painting

SC: We custom built the sideboard to work with the specific measurements of the wall. We also decided to paint it a little bit darker than the walls in order to stay within the blue colour palette whilst still keeping it separate it from the wall it’s against.

– The shelving system in the lounge/sitting room

SC: Manolo wanted to have a fish tank in the room that you could see through (therefore it couldn’t be against a wall) so our other set decorator, Roxanna Lojero, drew and built a shelving system with our blacksmith, which we placed in the middle of the room.  It ended up being a perfect place for the fish to live.

F&F: What are you most pleased with about this film set?

SC: I’m pleased that we achieved what we had planned to do. Throughout the process we stuck to our original colour palette and design ideas. As a set designer, it is very satisfying to see you are going in the right direction.

F&F: Which piece from this film set would you like to have in your own home and why?

F&F: How did you get into film and what other films have you work on?

SC:I studied at an arts school in Mexico City where I got involved painting backdrops for a film, which introduced me to that world. I also began making sculptures and paintings as props for films, which I enjoyed a lot. For several years I split my time between working on films and doing my own personal art installations. Eventually I began working in film full time and my last art installation was in 2005, which proudly won at the 5ta Bienal de Monterrey in Mexico.

In addition to Pefect Strangers, I have worked on Museo, Everybody Loves Somebody, American Curious, Distancias Cortas, Captive, Güeros, No se Aceptan Devoluciones and Colosio. 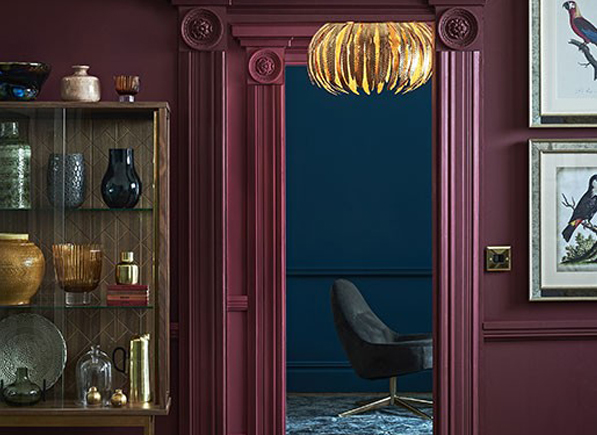 A great online shopping experience. John Lewis stock more classic design icons that you might envisage! The Collectors House range is also worth of note with its combination of opulent with the unexpected.