#FFFind: The painting and wall lights in Ana’s closet in Fifty Shades

The requests for us to identify furniture, decor and art in the Fifty Shades series are coming in thick and fast (we are happy to oblige, where we can). This can only mean one thing: Fifty Shades Freed is out soon (9 February) and the temperature is rising!

Our latest #FFFinds (Film and Furniture finds) are for one reader asking about a particular painting and for another asking about the wall sconce lights which we see in Anastasia Steele’s (Dakota Johnson) dressing room in Christian Grey’s luxury apartment.

The painting seen in Ana’s closet, to the right of the door (circled above) is called The Grid by artist Ann Vandervelde. This 36″ x 24″ art piece is from Petley Jones Gallery, Vancouver.

Ann Vandervelde, Seattle and Lopez Island, Washington artist, creates works that reflect structure, objects, texture, and colour working with a mixture of papers, acrylics, oil pastels and house paint on canvas. “Shape takes form, images appear and disappear like the titles at the beginning, middle, and end of each work”. For Vandervelde the challenge is to accept that a composition is never quite done, that it has the capacity to evolve and change and be understood separate from that initial vision. “I have always believed that paintings are a form of language. An image elicits immediate dialogue between itself and the viewer and it is not essential (sometimes counter intuitive) to understand what the artist was thinking/feeling at the moment of creation. A painting has a life that draws upon others’ experiences and that is what makes it so powerful.” Vandervelde says of her work.

We have a sneaky feeling they may have hung the painting the wrong way around in the film. It’s shown on the gallery website as being landscape, but it’s hung portrait in the movie film set. 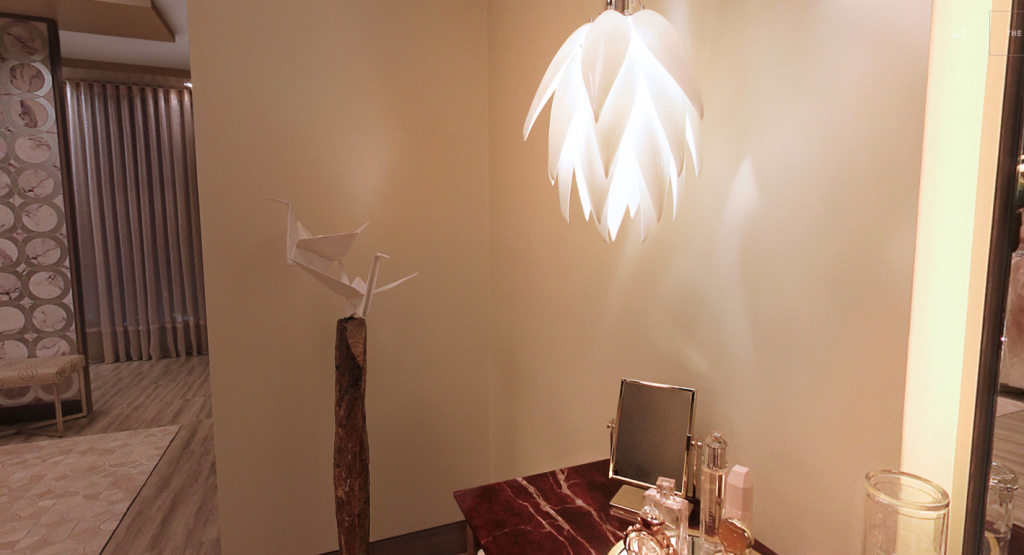 The lights hanging either side of the mirror at Ana’s dressing table are by Jeremy Cole, an artisan who has been working in ceramics since 2005. His simple and elegant aesthetic has won him commissions from the likes of Harry Winston, Bulgari, Cadillac, Four Seasons Resorts and Air New Zealand to name but a few. Embodying a philosophy that incorporates “beauty, elegance and craftsmanship,” Cole creates each and every piece from his New Zealand based studio. His lights are produced in-house where Cole, together with a small team, handcrafts each design.

Outside of Cole’s existing collections which are available to purchase, only a small number of customised private commissions are accepted annually. He certainly didn’t turn down Christian Grey!

Don’t miss our other features –  on the bird sculpture in Ana’s closet, Christian Grey’s study desk, the photographic art in Christian’s dining area, our interview and walk around with Fifty Shades Set Decorator Cal Loucks.

Most Popular
Feature Batman’s taste in modernist furniture revealed in Google maps tour of Bruce Wayne’s house from Batman v Superman: Part 1
Feature The film sets and furniture of Kubrick’s A Clockwork Orange: “A real horrorshow” Part 1
Feature Interiors inspiration from the film sets of Conversations with Friends
Feature Checkmate! The story behind Kubrick’s carpet in The Shining revealed
Newsletter